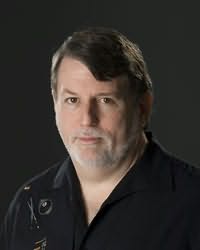 (b.1955)
Mark L. Van Name is a writer, technologist, and spoken word performer. As a science fiction author, he has published four novels (One Jump Ahead, Slanted Jack, Overthrowing Heaven, and Children No More) as well as an omnibus collection of his first two books (Jump Gate Twist); edited or co-edited three anthologies (Intersections: The Sycamore Hill Anthology, Transhuman, and The Wild Side), and written many short stories. Those stories have appeared in a wide variety of books and magazines, including Asimov's Science Fiction Magazine, many original anthologies, and The Year's Best Science Fiction.