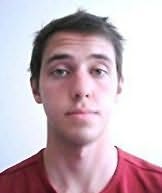 Niger
Rich Larson was born in Galmi, Niger, has studied in Rhode Island and worked in the south of Spain, and now lives in Ottawa, Canada. Since he began writing in 2011, he's sold over a hundred stories, the majority of them speculative fiction published in magazines like Asimov's, Analog, Clarkesworld, F&SF, Lightspeed, and Tor.com. His work appears in numerous Year's Best anthologies and has been translated into Chinese, Vietnamese, Polish, French and Italian.