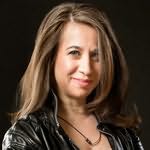 Jenny Milchman teaches writing and publishing for New York Writers Workshop. Last year she founded Take Your Child to a Bookstore Day, a holiday which went viral, enlisting booksellers in all 50 states and internationally. She co-hosts the literary series Writing Matters, which draws authors and publishing professionals from both coasts to events held at a local independent bookstore. Jenny features Edgar winners, international bestsellers, and independently published authors in the Made It Moments forum on her blog, Suspense Your Disbelief. Her short fiction has been published in a collection called "Lunch Reads" from Istoria Books.

Black-Eyed Susans (2015)
Julia Heaberlin
"A twisted tale of how evil makes its mark, Black-Eyed Susans winds a net around the reader, shifting time, perspective, and events until the only sure thing is the pulsing question at the heart of this novel: What happens when a ruthless predator leaves one of his victims alive?"

The Child Garden (2015)
Catriona McPherson
"Weaving strands of literary mystery, horror, and magical realism, The Child Garden is a twisting, now-you-see-it-now-you-don't tale about the ripple effect of tragedy."

Missing, Presumed (2016)
(DS Manon Bradshaw, book 1)
Susie Steiner
"There is a secret pulsing at the heart of this police procedural–slash–family thriller, and it isn’t only the truth about where beautiful young Edith Hind has gone. In heroine Manon Bradshaw, readers will find a character so real she bleeds. As Manon exposes the mystery behind Edith’s disappearance, she also reveals the truth about her own loneliness and life. Best of all, perhaps, in both women’s redemption, we discover the potential for our own."

This Is Not Over (2016)
Holly Brown
"With this She Said, She Said tale of terror in everyday life a getaway vacation rental gone wrong Holly Brown proves she is both a chronicler of our modern age."

The Vanishing Year (2016)
Kate Moretti
"Kate Moretti's The Vanishing Year is a Rebecca for the modern age - a novel filled with doubts and deception, secrets and history. Society wife Zoe Whitaker must confront the age-old question of whether forgetting our past dooms us to endless repetition--and more heartache and danger than one woman can bear."

River Bodies (2018)
(Northampton County, book 1)
Karen Katchur
"Karen Katchur weaves together a twisting braid in River Bodies, a multigenerational tale that dares us to examine not only the secrets we hide but the reasons we hid them in the first place."

All We Buried (2020)
(Sheriff Bet Rivers Mystery, book 1)
Elena Taylor
"There's a new sheriff in town...And as the facts of an old mining tragedy emerge, alongside all-too-modern secrets of adultery, betrayal, and abandonment, Bet realizes that this crime is as personal as it gets. For there are things more valuable than the gold in Collier's caves that must be uncovered—and Elena Taylor's gutsy new heroine is just the one to do it. Let's hope this is the start of a long-lived series!"

The Monsters We Make (2020)
Kali White
"Kali White catapults readers with fierce, unflinching honesty into a time corrupted by innocence. The characters are so real they sizzle, and will make you cry as you cheer them on. In the pulse-pounding climax, White manages to serve up justice without ever once denying the terror of all The Monsters We Make."

Vanishing Falls (2020)
Poppy Gee
"...a novel that blends crime and women's fiction with a mystery at its heart. Best of all, this novel introduces us to an unforgettable heroine, Jo-Jo, who will tug at your heartstrings even as you cheer for her to solve the crime."

Before She Was Helen (2020)
Caroline B Cooney
"Caroline B. Cooney has a genius for skewering culture, crime, and society. As once she demonstrated to the world a pressing level of danger we needed to understand, now she whips millennial angst, recreational drug use, and one feisty, heroic retiree into a thrilling, toxic brew that will leave readers cheering by the end. Retirement villages never seemed so mysterious and exciting! Under Cooney's deft hand, hidden dangers emerge, and the ties that bind us, young and old, just may save us in the end."
Visitors to this page also looked at these authors
James Patterson
Michael Robotham
Shari Lapeña
John Sandford
Brenda Novak
B A Paris
Karin Slaughter
David Baldacci
Lisa Jackson
Heather Gudenkauf
J P Delaney
T M Logan
Roz Nay
T Jefferson Parker
Harlan Coben
Lee Child