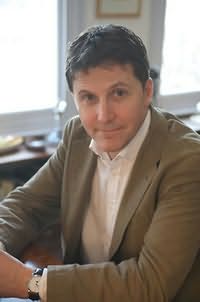 aka W C Ryan
William Ryan is an Irish writer who has lived in London for a number of years. After leaving Ireland after university, he practised briefly as a barrister in London. In his spare time, he wrote on an occasional basis for television and film before deciding to take writing more seriously. He completed a Masters in Creative Writing at St Andrews University in 2005. William is married and lives in West London.

Snowblind (2015)
(Dark Iceland, book 1)
Ragnar Jónasson
"As dazzling a novel as its title implies and the wonderful Ari Thór is a welcome addition to the pantheon of Scandinavian detectives. I can't wait until the sequel!"

In Bitter Chill (2015)
(DC Childs Mystery, book 1)
Sarah Ward
"In Bitter Chill deserves to be one of the stand out debuts of 2015. A tense, page-turning mystery that grips readers from the first. I'm looking forward to more from Sarah Ward."

The Song of the Stork (2017)
Stephan Collishaw
"An elegantly crafted, beautifully written novel about love, survival and hope against all the odds."

The Deaths of December (2017)
Susi Holliday
"A book full of chills and thrills for under the Christmas tree."

Seventeen (2018)
Hideo Yokoyama
"Seventeen is a brilliant novel on any level - it's a gripping page turner, while remaining moving and complex. It's a deeply satisfying read and it will be a while before I read anything as good."

The Absolution (2019)
(Freyja and Huldar, book 3)
Yrsa Sigurðardóttir
"Freyja and Huldar are one of the most intriguing crime detecting partnerships around and THE ABSOLUTION is a gripping, fascinating insight into the dark side of social media and children at risk. THE ABSOLUTION confirms Yrsa as a master storyteller with a satisfyingly slanted view of the world she recreates."

Liberation Square (2019)
Gareth Rubin
"A gripping murder mystery set in an alternative 1950s Britain. Rubin's London, split between American and Soviet zones after a disastrous World War Two, is vividly realised and his story is elegantly constructed. One not to miss."

Launch Code (2019)
Michael Ridpath
"Taut, gripping and relevant - the secret history of a narrowly-avoided nuclear Armageddon form the background to this classic thriller."

Keep Your Eyes on Me (2020)
Sam Blake
"Original, twisty and very gripping - this is a roller-coaster ride to be savoured."

Midnight at Malabar House (2020)
(Inspector Wadia, book 1)
Vaseem Khan
"Midnight at Malabar House is a first-rate murder mystery set in a post-partition India. In Persis Wadia, India's first female police detective, and Archie Blackfinch, a Scotland Yard forensics expert, Vaseem Khan has created a partnership that should hopefully run and run. Clever, thrilling, this is a novel to be savoured."