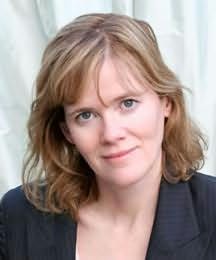 (b.1964)
Maria spent her first two years in Spain where her father had gone to write a play, but instead ended up writing the pilot for the TV series Batman. They packed up for Los Angeles, where Maria mainly remembers being driven around the hills in a Mercedes convertible with the latest Stephen Sondheim playing on 8-track. Wanting to expose the children to a change of seasons, her parents moved the family to Aspen in the early seventies. There, Maria became an expert skier, pot-smoker and delinquent. She was sent away to boarding school at Choate Rosemary Hall and loved every minute of it.

College was at Barnard, where Maria had big plans of becoming a novelist or an English teacher. Those dreams got derailed when she sold a movie script to Twentieth Century Fox just after graduation and moved to LA. She got into TV when her friend Darren Star-- whom she'd met on the ski slopes in Aspen years earlier-- gave her a job on Beverly Hills 90210. Thus began a fifteen-year career in television, writing for good shows like Ellen, Saturday Night Live, Mad About You and Arrested Development. And bad shows nobody needs to know about.

She had a baby and quit television. When it was time to get back to work, she resisted Hollywood and gave novel-writing a try. THIS ONE IS MINE is the result. Writing it was the most fun work experience of her life.

Maria, her boyfriend and their daughter have since left LA for Seattle where Maria's at work on her second novel, about a grand family of Aspen. Not the hot-tub-private-jet-cocaine-Aspen you think about when you think about Aspen. The much-cooler small-town Aspen of her youth, the one only locals can know. The working title is The Flood Girls. It's going to be really good.

Fathermucker (2011)
Greg Olear
"...a book you can't wait for your friends to read, too -- an exhilarating and fearless celebration of life's highs, lows, and all the glorious in-betweens."

Love, Nina (2013)
Nina Stibbe
"Breezy, sophisticated, hilarious, rude and aching with sweetness: Love, Nina might be the most charming book I've ever read."

The Vacationers (2014)
Emma Straub
"Witty, big-hearted, and packed with wisdom.. a breezy read that sneaks in its emotional wallops and leaves you smiling for days."

All Grown Up (2017)
Jami Attenberg
"Hilarious, courageous, and mesmerizing from page one, All Grown Up is a little gem that packs a devastating wallop. It's that rare book I'm dying to give all my friends so we can discuss it deep into the night. I'm in awe of Jami Attenberg."

The Arrangement (2017)
Sarah Dunn
"THE ARRANGEMENT is packed with laughs, wisdom and food for thought."

Lake Success (2018)
Gary Shteyngart
"The funniest book you'll read all year. A rollicking and zinger-filled road trip [that] sneakily deepens into a poignant tale of a man trying to outrace his problems.I was utterly floored."

French Exit (2018)
Patrick deWitt
"My favorite book of his yet. The dialogue is dizzyingly good, the world so weird and fresh. A triumph from a writer truly in the zone."

The Body Lies (2019)
Jo Baker
"Gripping and strange in the best possible way: the perfect marriage of risky literary fiction and full-on thriller."

Antkind (2020)
Charlie Kaufman
"Each page is so stuffed with invention, audacity, and hilarity, it feels like an act of defiance. Antkind is a fever dream you don’t want to be shaken awake from, a thrill ride that veers down stranger and stranger alleys until you find yourself in a reality so kaleidoscopic you will question your own sanity—or: the novel only Charlie Kaufman could pull off."