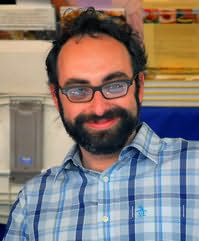 (b.1972)
Gary Shteyngart was born in Leningrad in 1972 and came to the US seven years later. He lives in New York.

Twenty Grand (2007)
Rebecca Curtis
"A book as delightful as it is disturbing. In a world of smug lies, Curtis writes exactly what needs to be written, and she writes it beautifully."

The Sugar Frosted Nutsack (2012)
Mark Leyner
"America should treasure its rare, true original voices and Mark Leyner is one of them. So treasure him already, you bastards!"

You & Me (2012)
Padgett Powell
"You & Me, mixed with 750ml of fine bourbon, is the most vfun you can have in many states without getting arrested."

Antonia Lively Breaks the Silence (2013)
David Samuel Levinson
"A sweet, smart, tasty book, it hooked me from the strat and swiftly pulled me to shore."

Reservoir 13 (2017)
(Reservoir)
Jon McGregor
"John McGregor is one of the UK's most fascinating and versatile writers. The fact that most American readers have never heard of him does not speak well of us. Let's all buy his book NOW."

The Windfall (2017)
Diksha Basu
"The funniest novel to come out of India in years, Diksha Basu's Delhi Riche is a timely snapshot of Delhi families on the way up, down and sideways."

Gork, the Teenage Dragon (2017)
Gabe Hudson
"Gabe Hudson may well be the funniest writer working today, and the most likely to break your heart."

If You Leave Me (2018)
Crystal Hana Kim
"An unforgettable story of family, love, and war set against the violent emergence of modern Korea."

A Spy in Time (2018)
Imraan Coovadia
"Imraan Coovadia is one of the best novelists to come out of South Africa in a long time. His prose is charming, clever and sly. A must read."

The Lonesome Bodybuilder (2018)
Yukiko Motoya
"This may well give Your Duck Is My Duck a run for its money as best title of the century. People around the world have been whispering Motoya’s name in my ear. Now she’s translated into English!"

The Altruists (2019)
Andrew Ridker
"Andrew Ridker has a lot to say about the way we live now. The result is one of those super-brilliant, super-funny novels one enjoys in the manner of a squirrel with an especially delicious acorn. I found myself trying to get out of every activity and responsibility just to come back to this novel."

Disappearing Earth (2019)
Julia Phillips
"A genuine masterpiece, but one that is easily consumed in a feverish stay-up-all-night bout of reading pleasure. It's as much a portrait of humanity as of a small Kamchatka community."

A Trick of Light (2019)
(Stan Lee's Alliances, book 1)
Stan Lee and Kat Rosenfield
"For lovers of Stan Lee this is nothing short of a publishing event! (And, honestly, who the hell doesn’t love Stan Lee?) Beguiling, cinematic, operatic, A Trick of Light is a bracing espresso first thing in the morning and the thrum of a familiar love deep at night."

The Slaughterman's Daughter (2020)
Yaniv Iczkovits
"A story of great beauty and surprise."

The Orchard (2020)
David Hopen
"A tremendous read, a brilliant excursion into the world of orthodox Jews, both thrilling and philosophical."

The Bad Muslim Discount (2021)
Syed M Masood
"Take it from a bad Jew, this is one of the bravest and most eye-opening novels of the year. Masood is a whiz at characters and knows the way the world works inside out. A future classic."