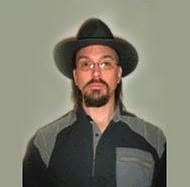 (b.1959)
David Niall Wilson has been writing dark fiction, fantasy, and science-fiction since the mid-eighties. He has six published novels, one collection and over 120 short stories published in various markets including Year's Best Horror XIX, Robert Bloch's Psychos, Love in Vein II, Werewolves, Deathport, and many more. His poetry has appeared in various venues in the small press, as well as in a limited edition package from Kelp Queen Productions, and a selection of haiku to appear in his upcoming Lone Wolf Collection, The Subtle Ties that Bind.

David writes from a great big house in North Carolina, where he lives and loves with Patricia Lee Macomber, their children Billy, Stephanie-occasionally his own boys Zach and Zane-and a plethora of cats and fish. David is currently president of the Horror Writer's Association.

Anthologies edited
Voices in the Darkness (2021)