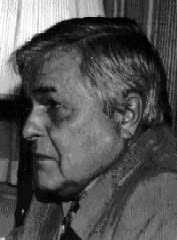 During the Spanish Civil War, he served as an ambulance driver for the Republicans as part of the Abraham Lincoln Brigade.

His first published short story, "The Spectre General" in the magazine Astounding (June 1952), was a humorous tale in which a long-forgotten maintenance brigade of the Imperial Space Marines has the potential of reinvigorating a declining Galactic empire. Cogswell wrote almost 40 science fiction stories, most of them humorous, and was co-author of a novel of the Star Trek franchise.

Cogswell was also the editor of the long-running "fanzine for pros", Proceedings of the Institute for Twenty-First Century Studies, a collection of which was published during 1993. In this, writers and editors discussed their and each other's works.

Genres: Science Fiction
Collections
The Wall Around the World (1962)
The Third Eye (1968)