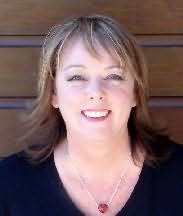 New Zealand
New Zealand-born to Dutch immigrant parents, Yvonne Lindsay always had a deep fascination with the written word (when she wasn't daydreaming!). An avid reader, Yvonne was introduced to the joy of romance books at the age of thirteen by an elderly neighbour. At the age of fifteen, totally inspired by the books she'd read, she tried her hand at her first romance novel (an abysmal attempt which still remains shrouded in dust, somewhere!).

After many scribblings, years, secretarial and sales rep jobs, marriage to her "blind date" hero and two kids later, Yvonne heard the wonderful Harlequin Mills & Boon author Susan Napier speak at a local writer's group. She mentioned Romance Writers of New Zealand and its contact details. At first Yvonne couldn't believe there was a group for people like her but after about a year she plucked up the courage to join RWNZ and spent several years working on the RWNZ committee. For Yvonne, the sheer bliss of meeting with other people with the same dreams and aspirations was indescribable.

Eventually she learned that to really be a writer you had to actually finish a book, so she did and won a few awards along the way, including the Romance Writers of Australia 1999 Emma Darcy Award and the Romance Writers of New Zealand 2004 Clendon Award. After thirteen years of submissions and rejections, Yvonne sold a Silhouette Desire story in 2005--a line she's always loved to read and one she's genuinely thrilled to be a part of.

Yvonne remains a firm believer in the power of love and romance in all walks of life.

Collections
Wanting What She Can't Have / Once Pregnant, Twice Shy (2014) (with Red Garnier)

Series contributed to
Diamonds Down Under
Jealousy & A Jewelled Proposition (2008)