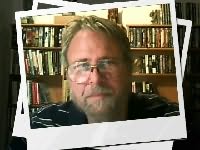 (1950 - 2013)
David B. Silvas first short story was published in 1981. His short fiction appeared in The Years Best Horror, The Years Best Fantasy & Horror, and The Best American Mystery Stories. In 1991, he won a Bram Stoker Award for his short story, The Calling. His first collection, Through Shattered Glass, was published by Gauntlet Press in 2001.

He is probably best known as the editor of The Horror Show, which was published quarterly from 1982 to 1991. This small-press horror magazine won a World Fantasy Award in 1988 and went on to publish the first early works of some of todays most talented and influential horror authors, such as Bentley Little, Brian Hodge, and Poppy Z Brite.