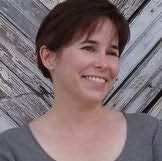 Fran's first novel, Updraft, debuts from Tor/Macmillan in 2015. Her short stories have appeared in publications including Asimov's, Beneath Ceaseless Skies, Nature, and Tor.com. She's taught writing and digital media at Loyola College, University of Baltimore, Carver Center for Arts and Technology, and the Johns Hopkins CTY Writing Program. She can often be found at GeekMom.com, on the Chesapeake Bay, in various airports trying to get home to Philadelphia, and on social media.

Slightly Ruby (2016)
Patrick Swenson
"A tempting glimpse at the mysterious, dark underbelly of a human and alien conspiracy. A dangerous and compelling story."

River of Teeth (2017)
(River of Teeth, book 1)
Sarah Gailey
"This is a thing I now know about Sarah Gailey: she is a word-magician who can render searing touch on a flat page and suspend disbelief flawlessly. The world of River of Teeth feels vast, and navigable due to her skill. The characters within, deep and yet intimately knowable."

The Prey of Gods (2017)
Nicky Drayden
"The Prey of Gods delivers on every promise in beautifully unexpected ways that leave you breathless, a little dizzy, and wanting more...Exquisite, fast-paced, and excellent fun."

The Strange Case of the Alchemist's Daughter (2017)
(Mary Jekyll, book 1)
Theodora Goss
"As if Charlie's Angels, as written by Mary Shelley, took over the Bluestocking Society, with bonus well mannered explosions. An utterly delightful, transformative read."

An Oath of Dogs (2017)
Wendy N Wagner
"Rare and precious...compelling and true."

Strange Practice (2017)
(Dr. Greta Helsing, book 1)
Vivian Shaw
"In Vivian Shaw's Strange Practice, a charmingly unusual doctor and her charges keep the city of London from grave danger. In the process, they peel back the covers of familiar (and according to them, somewhat 'libelous') stories to find that reality - especially with the undead - is more poignant and complex than it seems at first glance. An excellent adventure."

An Unkindness of Magicians (2017)
Kat Howard
"This is an amazing book filled with magic, consequences, and what happens when you fight rather than turning away. This is Omelas, for magic. This is the price that must be paid. This is the story the others forgot to tell."

The City of Brass (2017)
(Daevabad Trilogy, book 1)
S A Chakraborty
"S. A. Chakraborty's debut novel is an adventure that sweeps readers through the streets of Cairo and out into a spellbinding landscape of magic, warring clans, sacrifice, and betrayal. Each page reveals a new wonder. Con-woman Nahri, djinn warrior Dara, and the enchanted city that they--and we--are only just beginning to understand, are captivating. What an exciting ride!"

Jade City (2017)
(Green Bone Saga, book 1)
Fonda Lee
"With a powerful family of complex characters -- including my favorite, Kaul Shaelinsan -- Jade City beckons readers to secret family meetings and public battles between warring clans. With magical jade at stake, winning the battle for control of a city has never been more important, or more dangerous. Fonda Lee's first adult novel is a fast-hitting, tantalizing, sometimes unsettling, and always insightful book with a wealth of power at its core. A modern-day epic."

In the Vanishers' Palace (2018)
Aliette de Bodard
"A transformative experience. With dragons."

Empire of Sand (2018)
(Books of Ambha, book 1)
Tasha Suri
"Empire of Sand is astounding. The desert setting captured my imagination, the magic bound me up, and the epic story set my heart free."

Here and Now and Then (2019)
Mike Chen
"Mike Chen's Here and Now and Then takes time travel past the 'what if?' and into the 'what after?' all while dealing elegantly 'with what could possibly go wrong!?' A strong and very real father-daughter relationship is tested across the centuries, as Chen's characters navigate adventure and consequences together. A tight net of excitement and wonder."

The Perfect Assassin (2019)
(Chronicles of Ghadid, book 1)
K A Doore
"In a high-flung desert city, a reluctant assassin's choices threaten his family's way of life, those he loves, and, worst of all, the spirits of the dead. Amastan Basbowen's options are all dangerous, but he must move forward. The ensuing intrigue forms the core of a highly exciting adventure."

Empress of Forever (2019)
Max Gladstone
"Places Gladstone firmly in the lineage of William Gibson and Neal Stephenson, and yet stands apart as something incredibly special."

The Sin in the Steel (2020)
(Fall of the Gods , book 1)
Ryan Van Loan
"A multilayered attack on tired adventure tropes. Two mercenaries, wrongly accused, are forced to investigate a crime, one that transforms them and their world forever. A blisteringly paced, amazingly fun and thoughtful read!"