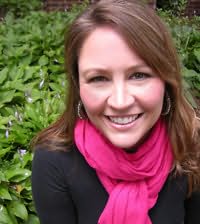 Heather Webb grew up a military brat and naturally became obsessed with travel, culture, and languages. She put her degrees to good use teaching high school French for nearly a decade before turning to full time novel writing and freelance editing. Her debut, BECOMING JOSEPHINE, released January 2014 from Plume/Penguin. Her forthcoming novel, RODIN'S LOVER, will release in winter of 2015.

When not writing, Heather flexes her foodie skills or looks for excuses to head to the other side of the world. She loves to chitchat on Twitter with new reader friends or writers (@msheatherwebb) or via her blog. Stop on by!

The Alice Network (2017)
Kate Quinn
"Kate Quinn delivers an enthralling tale filled with breath-taking narrative that will make the reader feel as if they’re in the back of the roadster, riding along with the raucous Eve and courageous Charlie on their clandestine adventures. Suspenseful and engrossing, THE ALICE NETWORK is a must-read!"

Impossible Saints (2018)
Clarissa Harwood
"Impossible Saints tells the passionate story of the suffragist movement in early twentieth century London, and the sacrifices made to secure what so many women take for granted today--the right to vote. Lilia Brooke won't succumb to a society bent on curtailing her rights, or a man she loves who wishes to keep her safely at home, even if it means denying her heart. Consuming, well-paced, and important, this fascinating novel fills in the blanks of a past so rarely given air time in today's myopic world."

Next Year in Havana (2018)
(Cuba Saga, book 1)
Chanel Cleeton
"With graceful prose, Cleeton evokes the former grandeur of 1950s Cuba, and contrasts it with modern day Miami in this sweeping family saga of loss and love."

Between Earth and Sky (2018)
Amanda Skenandore
"A sweeping tale of courage, friendship, and love, Between Earth and Sky held me spellbound. This engrossing novel transports the reader to frontier America, amid the tensions between the White Man, the Natives, and those who longed to bridge the gap in understanding and compassion. Skenandore doesn’t miss a beat—her elegant prose sings, Alma and Harry’s story mesmerizes, and the evocative setting feels all too real. I adored this book!"

A Light of Her Own (2018)
Carrie Callaghan
"Colorful and absorbing, Callaghan paints a lively portrait of seventeenth century Dutch life in A Light of Her Own, and the struggles female artists endured to make names for themselves. After reading, I found myself eager to book my next trip to the Netherlands!"

The Chef's Secret (2019)
Crystal King
"A veritable feast for the senses, The Chef's Secret is part mystery, part love story, and all sumptuous sixteenth century Italy. This tale of one of the world's first celebrity chefs--Bartolomeo Scappi, a DaVinci of Renaissance cuisine--sent me on a quest to know more, and to my kitchen to experiment--a sign of a great historical novel. Readers will delight in a plot as juicy as Scappi's braised beef!"

Dreamland (2019)
Nancy Bilyeau
"Bilyeau is at the height of her talents in the immersive and gripping Dreamland."

The Borgia Confessions (2020)
Alyssa Palombo
"The entangled world of the Borgias courses vividly to life, exposing the dark faces of class structure and the all-consuming greed that comes with ambition- and love."

Beyond the Ghetto Gates (2020)
Michelle Cameron
"Fascinating! Cameron shines a light on a rarely explored facet of the Napoleonic era set in the Italian provinces with a spirited Jewish woman at its center. Laced with vibrant detailing and endearing characters, Beyond the Ghetto Gates is a compelling and satisfying read."

The Last Bathing Beauty (2020)
Amy Sue Nathan
"In this reimagining of Dirty Dancing, Nathan demonstrates expert storytelling when we meet the charismatic Betty ‘Boop’ Stern as a young woman, and also as an eighty-four-year-old as she looks back on a difficult choice that altered the path of her glittering future. Told with empathy and lyrical prose, The Last Bathing Beauty is a winning tale of friendship, regret, and second chances with a ring of endearing and spirited women at its heart."

Jackie and Maria (2020)
Gill Paul
"Gill Paul weaves together the lives of two fascinating and flawed icons... A dishy and delectable novel, Jackie and Maria, is sure to please readers with its famous cast of characters from John F. Kennedy to Aristotle Onassis, its taut pacing, and a truly absorbing story."