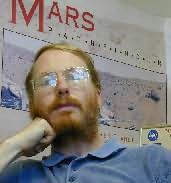 (Geoffrey Alan Landis)
(b.1955)
Geoffrey Landis was actually born in Detroit, Michigan. He left Detroit at age six months, and moved to Arlington, Virginia; Baltimore, Maryland; Western Springs, Illinois; Morristown, NJ; Center Valley, PA; and Winnetka, Illinois while growing up. After going to college at MIT and graduating with degrees in Physics and Electrical Engineering, he worked in the Boston area for five years. He then moved to Providence, Rhode Island to attend graduate school at Brown University.After receiving his Ph.D. in physics, Dr. Landis worked as a postdoctoral researcher at the NASA Lewis Research Center (now renamed NASA Glenn), then worked as a NASA contractor, and finally as senior scientist at the Ohio Aerospace Institute, before accepting his current job as a civil-service scientist in the Photovoltaics and Power Technology Branch at NASA Glenn Research Center in Cleveland, where he works on Mars exploration with the Mars Exploration Rovers, and on developing advanced technology for future space missions. In 2005 and 2006, he was the Rodney E. McNair Visiting Professor of Astronautics at MIT. He currently lives Berea, Ohio with cats named Azrael and Tyrael, several teddy-bears, more books than you can count in a year, and no goldfish.He is married to science fiction writer Mary A. Turzillo.