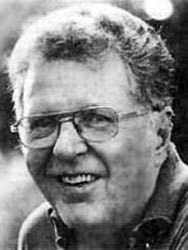 (1922 - 1996)
Walter M. Miller Jr grew up in the American south. He enlisted in the Army Air Corps a month after Pearl Harbor and spent most of the war as a radio operator and gunner, participating in fifty five combat sorties over Italy and the Balkans, including the assault on Monte Cassino. After the war he studied engineering before turning to writing. A Canticle for Leibowitz won a Hugo, and his only other novel, Leibowitz and the Wild Horsewoman was published posthumously.