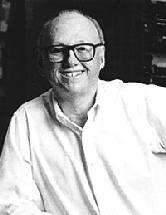 (b.1928)
William F. Nolan is best known as the co-author (with George Clayton Johnson) of Logan's Run -- a science fiction novel that went on to become a movie, a television series and is about to become a movie again -- and as single author of its sequels. His short stories have been selected for scores of anthologies and textbooks and he is twice winner of the Edgar Allan Poe Special Award from the Mystery Writers of America.

Nolan was born in 1928 in Kansas City Missouri. He attended the Kansas City Art Institute and worked as an artist for Hallmark Cards. He moved to California in the late 1940s and studied at San Diego State College. He began concentrating on writing rather than art and, in 1952, was introduced by Ray Bradbury to another young up-and-coming author, Charles Beaumont. Moving to the Los Angeles area in 1953, Nolan became along with Bradbury, Beaumont, and Richard Matheson part of the "inner core" of the soon-to-be highly influential "Southern California Group" of writers. By 1956 Nolan was a full-time writer. Since 1951 he has sold more than 1500 stories, articles, books, and other works.