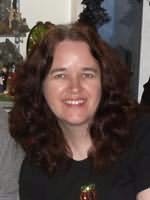 Lisa Morton is a screenwriter, author of non-fiction books, award-winning prose writer, and Halloween expert. Her work was described by the American Library Associations Readers Advisory Guide to Horror as consistently dark, unsettling, and frightening, and Famous Monsters called her one of the best writers in dark fiction today. She began her career in Hollywood, co-writing the cult favorite Meet the Hollow heads (on which she also served as Associate Producer), but soon made a successful transition into writing short works of horror. After appearing in dozens of anthologies and magazines, including The Mammoth Book of Dracula, Dark Delicacies, The Museum of Horrors, and Cemetery Dance, in 2010 her first novel, The Castle of Los Angeles, was published to critical acclaim, appearing on numerous Best of the Year lists. Her book The Halloween Encyclopedia (now in an expanded second edition) was described by Reference & Research Book News as the most complete reference to the holiday available, and Lisa has been interviewed on The History Channel, the Discovery Channels series Perfecting History, and in The Wall Street Journal as a Halloween authority. She is a six-time winner of the Bram Stoker Award®, a recipient of the Black Quill Award, and winner of the 2012 Grand Prize from the Halloween Book Festival, and her most recent releases are the novellas Smog (Double Down #2) and Summers End (both from Journal Stone Publishing). A lifelong Californian, she lives in North Hollywood.

The Best of The Horror Zine (2016)
Jeani Rector
"Short fiction is the beating, bloody heart of the horror genre, and The Horror Zine has consistently presented startling and superb short stories, poetry and art."

Halloween Season (2020)
Lucy A Snyder
"Voice’ is one of those writing advice words that’s been so overused in recent years it’s almost lost all meaning…until you read a collection of work by Lucy Snyder, and then you know. Lucy’s work is smart, passionate, and deeply creepy, all told in her very distinctive style. Thank you, Lucy, for reminding us that ‘voice’ is still alive and kicking in the best genre fiction."

A Solitude of Wolverines (2020)
(Alex Carter , book 1)
Alice Henderson
"A Solitude of Wolverines is a rare species indeed: an edge-of-your-seat thriller that engages not just the adrenaline glands but the heart and soul as well. With an engaging heroine, an incredible setting and pulse-pounding action, this one is truly a breed apart."