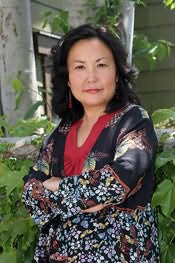 MURDER ON BAMBOO LANE, her new mystery series with a female twentysomething LAPD bicycle cop, was released with Berkley Prime Crime in spring 2014. Her next in the series, A GRAVE ON GRAND AVENUE, will be released in April 2015.

She also has penned a middle-grade novel, 1001 CRANES, which was chosen as an Honor Book for the Youth Literature of the Asian/Pacific American Award for Literature in 2009.

A former editor of the largest Japanese American newspaper in the U.S., she also has released a number of nonfiction works. A number of her short stories have been included in various anthologies.

The Spy on the Tennessee Walker (2015)
(Maggie Fiori, book 3)
Linda Lee Peterson
"This spot will soon be filled with high praise from an acclaimed and Edgar Award-winning writer of two mystery series."

Sansei and Sensibility (2020)
Karen Tei Yamashita
"Through vignettes, recipes, and correspondence, master writer Karen Tei Yamashita takes us through the rabbit hole of Japanese America—in particular, her hometown of Gardena, California, where an ethnic community culturally transformed a middle-class bedroom town. Part Ozu meditation of everyday life, part modern folk tale with colorful characters like a truth-telling dental hygienist, Sansei and Sensibility offers a unique and necessary perspective of what it means to be the aging grandchild of Asian immigrants, wondering what you will leave behind for the next generation. As in all of her books, Yamashita deconstructs form and genre to create a work that both delights and challenges."