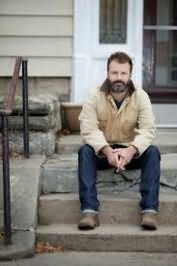 Nickolas Butler is the author of the novel "Shotgun Lovesongs" and a forthcoming collection of short stories entitled, "Beneath the Bonfire".

Born in Allentown, Pennsylvania and raised in Eau Claire, Wisconsin, he was educated at the University of Wisconsin-Madison and the University of Iowa Writer's Workshop. His work has appeared in: Ploughshares, The Christian Science Monitor, The Kenyon Review Online, Narrative, The Progressive, and many other publications.

Along the way he has worked as: a meatpacker, a Burger King maintenance man, a liquor store clerk, a coffee roaster, an office manager, an author escort, an inn-keeper (twice), and several other odd vocations.

He presently lives on 16 acres of land in rural Wisconsin adjacent to a buffalo farm. He is married with two children.

Collections
Beneath the Bonfire (2015)

The Antiques (2017)
Kris D'Agostino
"The Antiques is a literary hurricane of hilarity, heartbreak, and familial redemption."

The Narcissism of Small Differences (2020)
Michael Zadoorian
"Against the backdrop of a crumbling Detroit, Zadoorian's prose sparkles and shimmers, infusing this love ballad of a novel with humor and light. Zadoorian is a writer who hears music everywhere and in everything, a writer who turns the act of reading into something as lush as a concert, as intimate as a mixtape."

The End of the Day (2020)
Bill Clegg
"Delicate, deeply observed, and deftly crafted, THE END OF THE DAY is a beautiful mosaic of memory, regret, and loss. A triumphant and noble novel."

Ruthie Fear (2020)
Maxim Loskutoff
"An original and shape-shifting western parable. A book full of earnest, proud, damaged, and endearing characters, each one chasing their own American Dream. Maxim Loskutoff’s writing is endowed with fearless audacity, stunning grace, and gutsy heart."

American Gospel (2020)
Lin Enger
"A tightly constructed novel in which unexpected second chances lead to forgiveness, lost and found families, and enlightenment. American Gospel is tenderly written, expertly plotted, and culminates in an ending for the ages. A wonderful book."

Cloudmaker (2021)
Malcolm Brooks
"Epic in scope, beautifully crafted in its prose, and always--always--adoring of its cast of unforgettable characters, Cloudmaker is a stunner of a novel. A book that absolutely soars."

Raft of Stars (2021)
Andrew J Graff
"In ruggedly beautiful prose, and with a deep affection for his damaged, but always loveable characters, Graff delivers a novel with real heart and soul. An authentic look into the heartland of America, into one-parent households, where mothers and grandparents are supporting the next generation while fathers are either absentee, or should be. Like a barrel going over a waterfalls, Raft of Stars sweeps its reader downstream, and fast. Hold on for the ride."

Shoulder Season (2021)
Christina Clancy
"Shoulder Season is a delight. Briskly plotted, the book moves like a river through time, sweeping the reader along for an unexpected, humorous, and surprising journey of friendship, exploration, and discovery."

Damnation Spring (2021)
Ash Davidson
"Damnation Spring is, like the redwood trees at the center of its story, a beautiful, timeless, and breathtaking novel. It is painstakingly researched and lovingly crafted. But most importantly, the author is incredibly sensitive and tender with her characters, who, for the reader, quickly become as close as neighbors or family. Ultimately, time is the best judge of artistic quality, but for me, this book has all the makings of a classic. It is, in my estimation, a Great American Novel. A novel that tips its cap at writers like Steinbeck and Kesey, but also confidently forges ahead, blazing new paths. Just - a stunning, wondrous book."
Visitors to this page also looked at these authors
Lindsay Cameron
Richard Roper
Brandon Webb
Candace Bushnell
Louise Candlish
Ace Atkins
James Patterson
Meg Cabot
Karin Slaughter
Lisa Kleypas
Brian Freeman
C J Box
Vicki Delany
Karin Tanabe
Omar El Akkad
Owen Matthews