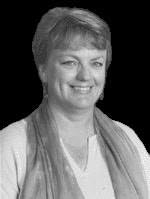 Australia (1957 - 2011)
Sara Douglass was born in Penola, a small farming settlement in the south of Australia, in 1957. She spent her early years chasing (and being chased by) sheep and collecting snakes before her parents transported her to the city of Adelaideand the more genteel surroundings of Methodist Ladies College. Having graduated, Sara then became a nurse on her parents' urging (it was both feminine and genteel) and spent seventeen years planning and then effecting her escape.

That escape came in the form of a Ph.D. in early modern English history. Sara and nursing finally parted company after a lengthy time of bare tolerance, and she took up a position as senior lecturer in medieval European history at the Bendigo campus of the Victorian University of La Trobe. Finding the departmental politics of academic life as intolerable as the emotional rigours of nursing, Sara needed to find another escape.

This took the form of one of Sara's childhood loves - books and writing. Spending some years practising writing novels, HarperCollins Australia picked up one of Sara's novels, BattleAxe (published in North America as The Wayfarer Redemption), the first in the Tencendor series, and chose it as the lead book in their new fantasy line with immediate success. Since 1995 Sara has become Australia's leading fantasy author and one of its top novelists. Her books are now sold around the world.

Collections
The Hall of Lost Footsteps (2011)

Non fiction
The Betrayal of Arthur (1999)

Betrayal (2001)
(Trinity, book 1)
Fiona McIntosh
"Betrayal is a book for lovers of traditional fantasy, a fast-paced tale of forbidden love and magic."