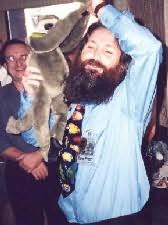 South Africa
Dave Freer is a South African-born science fiction author writing mostly humorous or alternate history novels.Dave Freer was conscripted into the South African Defence Force and sent to the Angolan Border as a medic.After attending university he became an ichthyologist. He then worked as research officer for the Western Cape commercial fishery. He managed a fish farm for a time but the farm was forced to close (through no fault of his own....) and he started to write.Six years later, his first book (The Forlorn) was published by Baen Books.