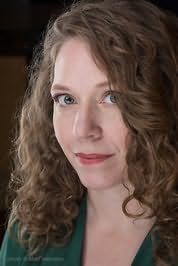 AMY GENTRY is a book reviewer for the Chicago Tribune whose work has also appeared in Salon, LA Review of Books, and the Best Food Writing of 2014. She lives in Austin, where she volunteered for several years with victims of sexual and domestic violence. Good as Gone is her first novel.

The Sisters Chase (2017)
Sarah Healy
"The Sisters Chase is a deliciously compulsive read, a miniature mystery of love, survival, and sisterhood written on the scale of the human heart. Deceptively simple, gracefully realized, and occasionally wicked, it lingers like a summer dream after the last page is turned."

Leave No Trace (2018)
Mindy Mejia
"A tense and gripping read that plumbs the depths of grief and longing, LEAVE NO TRACE is as thrilling as a whitewater rapid and as dark as the Minnesotan wilderness itself. Mejia has a gift for creating characters who feel like family, and by the end of this book I would have followed her gutsy speech-therapist heroine Maya to the ends of the earth. Through twist after twist, this riveting story will have you asking yourself just how far you would go to find out exactly where you came from."

Hunting Annabelle (2018)
Wendy Heard
"Is Hunting Annabelle an unconventional romance, a creepy psychodrama, or a detective story about a good kid stuck in a bad situation? I devoured this thrilling debut in one sitting to find out, and it took me on a wild, twisty ride until the very last page."

Dear Wife (2019)
Kimberly Belle
"DEAR WIFE had me at hello. From the moment I met Beth, a smart, tough woman on the run from her abusive husband, I couldn't stop reading--and that was before the twists started coming fast and furious. Written with heart, humor, and a hefty dose of truth beneath the thrills, DEAR WIFE is a wild and massively entertaining ride."

The Wolf Wants In (2019)
Laura McHugh
"Laura McHugh’s thrilling third novel, The Wolf Wants In, puts her right alongside Daniel Woodrell and Bonnie Jo Campbell as a leading voice in rural noir. In taut yet evocative prose, McHugh unfolds an intricately plotted mystery of three murders in a small Midwestern town ravaged by the opioid epidemic and generational poverty. As the pages fly toward their devastating conclusion, we never lose sight of the way grief unravels individuals, families, and entire communities. Masterful and chilling."

Follow Me (2020)
Kathleen Barber
"A thriller for the Instagram age, Follow Me doesn’t let up until the final twist. It had me looking over my shoulder, closing my social media apps with a shudder, and above all, flipping pages to find out what happened next."

Shadow Garden (2020)
Alexandra Burt
"Alexandra Burt's latest is a haunted and haunting read, rendered with her usual gift for psychological detail in stunningly atmospheric prose. In the gothic tradition of Rebecca, The Yellow Wallpaper, and The Bad Seed, Shadow Garden plunges readers into a clammy, chilly fog on every page. I won't soon forget the ending, and neither will you."

They Never Learn (2020)
Layne Fargo
"Sizzling with rage and wit, Layne Fargo's They Never Learn will delight fans of Karin Slaughter, Dexter, and Killing Eve with its deftly drawn portrait of a woman on fire and her unquenchable lust for revenge. Addictive, sensual, breathlessly plotted, and thoroughly unputdownable--this tightrope thriller feels a bit like getting away with murder."

The Lady Upstairs (2020)
Halley Sutton
"I couldn't put The Lady Upstairs down. Halley Sutton's debut crackles with the unmistakable voice of its heroine, a cynical, wisecracking femme fatale straight out of a Raymond Chandler novel, who becomes enmeshed in a twisty tale of greed, betrayal, and vengeance. As dark as Megan Abbott and as voice-y as Lisa Lutz, this astoundingly self-assured debut ranks its author alongside the best in her genre. The Lady Upstairs is L.A. noir at its finest."
Visitors to this page also looked at these authors
Tess Gerritsen
Paula Hawkins
Karin Slaughter
Tana French
Elly Griffiths
Belinda Bauer
Jane Harper
Layne Fargo
John Grisham
Carl Hiaasen
Lisa Scottoline
J A Jance
Lisa Gardner
Gillian Flynn
J T Ellison
Heather Gudenkauf