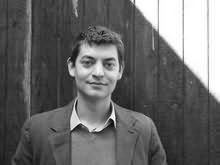 Kevin Wilson is the author of the collection, Tunneling to the Center of the Earth (Ecco/Harper Perennial, 2009), which received an Alex Award from the American Library Association and the Shirley Jackson Award, and a novel, The Family Fang (Ecco, 2011).  His fiction has appeared in Ploughshares, Tin House, One Story, Cincinnati Review, and elsewhere, and has appeared in four volumes of the New Stories from the South: The Years Best anthology as well as The PEN/O. Henry Prize Stories 2012.  He has received fellowships from the MacDowell Colony, Yaddo, and the KHN Center for the Arts.  He lives in Sewanee, Tennessee, with his wife, the poet Leigh Anne Couch, and his sons, Griff and Patch, where he is an Assistant Professor in the English Department at the University of the South.

The Wonder Bread Summer (2013)
Jessica Anya Blau
"A fearless writer, capable of anything and everything."

I Am Having So Much Fun Here Without You (2014)
Courtney Maum
"A moving, complicated, big-hearted novel."

Sycamore (2017)
Bryn Chancellor
"Sycamore is an amazing showcase for Bryn Chancellor's great talent, the way she allows each of the various characters to shine on their own, but connects them with such subtlety that their light forms a constellation that maps out the grief, the regrets, and the strength of an entire community. This is a powerful debut novel, one without flaw, and it will slay you."

The Ready-Made Thief (2017)
Augustus Rose
"Augustus Rose shows that he has one of the steadiest hands in fiction … Rose has crafted something memorable, crackling with energy, a truly wonderful tale."

The Last Romantics (2019)
Tara Conklin
"A triumph of storytelling, an ambitious examination of the failures of love and how we, against all odds, find a way to survive.... A complex, resonant work that will reshape your understanding of family."

The Municipalists (2019)
Seth Fried
"The longer you bask in the glow of Seth Fried's wondrous novel, big concepts like Technology and Work and Friendship begin to take on a curious shape, turn into something so unique that you wonder how one writer has so much imagination, so much insight, so much fun with the world they've created. The Municipalists is the work of a hilarious and empathetic talent."
Visitors to this page also looked at these authors
Elizabeth Strout
James Patterson
Ann Patchett
Jeff Lindsay
Stuart Woods
Janet Evanovich
Danielle Steel
David Baldacci
Daniel H Wilson
Erin Morgenstern
Beatriz Williams
F Paul Wilson
Nora Roberts
John Sandford
Jacqueline Wilson
Laura Wilson