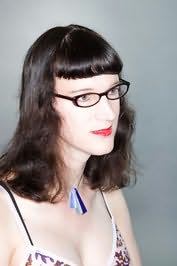 Charlie Jane Anders is an American author and blogger. Her science-fiction stories have been published by Tor.com, Strange Horizons and Flurb, among others.

Her 2011 novelette Six Months, Three Days won the 2012 Hugo and was nominated for the Nebula and Theodore Sturgeon Awards. Her YA novel Choir Boy won a Lambda Literary Award in 2005 and was a finalist for the Edmund White Award. Shes also the co-editor of Shes Such A Geek: Women Write About Science, Technology And Other Nerdy Stuff.

She published the indy mag other magazine and organizes the award-winning Writers With Drinks reading series.

She lives in the San Francisco Bay area, where she is the managing editor of the science fiction website io9. Her partner Annalee Newitz is the editor-in-chief of io9.

vN (2012)
(Machine Dynasty, book 1)
Madeline Ashby
"If you have been missing the kind of thought-provoking-yet-exciting stories about artificial creatures that only come along once in a while, vN is well worth grabbing. It's disturbing and sometimes upsetting — but the ending is a giant insane weird thrill that makes the whole thing pay off."

A Taste of Honey (2016)
(Sorcerer of the Wildeeps)
Kai Ashante Wilson
"It's great to see a new story that shows that fantasy still has some really fascinating places to go."

The Goblin Crown (2016)
(Billy Smith and the Goblins, book 1)
Robert Hewitt Wolfe
"The Goblin Crown is the smart, morally complex version of the heroic coming-of-age story that you've been waiting for."

Spoonbenders (2017)
Daryl Gregory
"A joyfully weird book about psychics and con artists, and the marvels that result from the intermarriage of the two."

River of Teeth (2017)
(River of Teeth, book 1)
Sarah Gailey
"This hippopotamus epic is just as preposterously fun as you could possibly have hoped but it's also a brave, clever alternate history. River of Teeth packs one hell of a gold-plated bite."

Annex (2018)
(Violet Wars, book 1)
Rich Larson
"Rich Larson has an amazing knack for capturing the lonesomeness of growing up, and how much random cruelty and steadfast companionship there is in childhood. Not to mention, just how alien and scary families can be."

Miranda in Milan (2019)
Katharine Duckett
"Miranda in Milan is a wondrous tale that turns Shakepeare's world sideways, to reveal everything he left out -- and to show us that the greatest magic comes from claiming your freedom."

Other Words for Smoke (2019)
Sarah Maria Griffin
"A fascinating coming-of-age story...Griffin has a keen eye for the beautiful agony of adolescence, and that’s what makes this book such a compelling read."

Chosen Ones (2020)
Veronica Roth
"Chosen Ones by Veronica Roth is the cure for all those humdrum 'one true savior' narratives. This dark, complex novel rocked my heart and left me with a renewed sense that saving the world is a job that never ends. Roth's version of magic is as flawed and fascinating as her characters, and her story keeps you guessing until the wild conclusion. You'll never look at fantasy heroes the same way again."

The Mermaid, The Witch, and the Sea (2020)
Maggie Tokuda-Hall
"The Mermaid, the Witch, and the Sea will take you on the journey of a lifetime. Maggie Tokuda-Hall has created characters I've never seen before, then put them in an adventure that feels more real than real life and twice as unpredictable. I wanted to live in the world of this book forever, and I can't stop obsessing about the rich tapestry of pirates, mermaids, witches, and conniving nobles who inhabit it. The Mermaid, the Witch, and the Sea might just remind you of why you fell in love with adventure in the first place and change how you think about the genre forever. I envy anyone who's getting to experience this incredible book for the first time."

Sorrowland (2021)
Rivers Solomon
"Sorrowland by Rivers Solomon contains so much wisdom and insight, wrapped in an abundance of passion and fury and tenderness. This is the first book I've read in ages that I'm certain I will come back to again and again, because there are rich gorgeous passages that I already know will mean more to me on subsequent readings. There is so much going on in this book, too: the spectre of what happens when rebellion is co-opted, our longstanding practice of using Black bodies for cruel and unethical experiments, the audacity of queer love. The arc of this book takes Vern and her babies away from civilization and then back to it - but they return changed, and they change everyone else, and this book restored my faith in our potential to transform just when I needed it most."

Monkey Around (2021)
Jadie Jang
"I can't help being obsessed with the beautifully complex world of shapeshifters and magic that Jadie Jang has created. Monkey Around thrilled me and kept me turning pages, but also left me convinced that if I just looked carefully enough, I would see ancient secrets lurking around every corner in the city. Most books are lucky to have either a fascinating world or unforgettable characters, but Monkey Around has both, in spades."