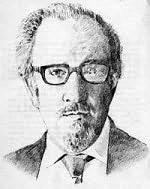 (1912 - 1994)
Julian Symons is primarily remembered as a master of the art of crime writing. However, in his eighty-two years he produced an enormously varied body of work. Social and military history, biography and criticism were all subjects he touched upon with remarkable success, and he held a distinguished reputation in each field.

His novels were consistently highly individual and expertly crafted, raising him above other crime writers of his day. It is for this that he was awarded various prizes, and, in 1982, named as Grand Master of the Mystery Writers of America - an honour accorded to only three other English writers before him: Graham Greene, Eric Ambler and Daphne Du Maurier. He succeeded Agatha Christie as the president of Britain's Detection Club, a position he held from 1976 to 1985, and in 1990 he was awarded the Cartier Diamond Dagger from the British Crime Writer

The Killer Inside Me (1952)
Jim Thompson
"The undisputed father of the detective story."

Mystery Stories (1956)
Stanley Ellin
"The finest collection of stories in the crime form published in the past half century."

How Like an Angel (1962)
Margaret Millar
"Margeret Millar has few peers, and no superior... Her skill is shown at its finest in HOW LIKE AN ANGEL."

I Love, I Kill (1968)
John Bingham
"Ar his best he has no superiors and few equals in subtlety and psychological penetration among modern crime writers."

Heroes and Villains (1969)
Angela Carter
"Original, talented, disturbing...the vision is so complete and so finely imaginative."

Dance Hall of the Dead (1973)
(Joe Leaphorn And Jim Chee, book 2)
Tony Hillerman
"The undisputed father of the detective story."

The Choirboys (1975)
Joseph Wambaugh
"The undisputed father of the detective story."