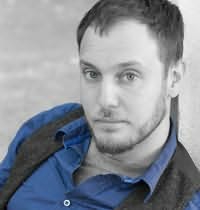 Sam J. Miller lives in New York City now, but grew up in a small town in upstate New York. He is the last in a long line of butchers. In no particular order, he has also been a film critic, a grocery bagger, a community organizer, a secretary, a painter's assistant and model, and the guitarist in a punk rock band. His fiction has been nominated for the Nebula Award and the Theodore Sturgeon Award, was long-listed for the Hugo Award, and has won the Shirley Jackson Award. He's a graduate of the Clarion Writers Workshop. His husband of fifteen years is a nurse practitioner and is way smarter and handsomer than Sam.

The Nine (2017)
(Thieves of Fate, book 1)
Tracy Townsend
"George R. R. Martin and China Mieville have nothing on the audacious, intricate world-building, gritty politics, and compelling characters in this excellent debut."