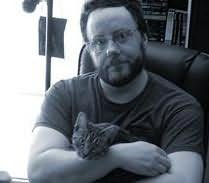 (b.1960)
Husband of Lucy A Snyder
Gary A. Braunbeck is a prolific author who writes mysteries, thrillers, science fiction, fantasy, horror, and mainstream literature. He is the author of 19 books; his fiction has been translated into Japanese, French, Italian, Russian and German. Nearly 200 of his short stories have appeared in various publications. Some of his most popular stories are mysteries that have appeared in the Cat Crimes anthology series.

The Licking Valley Coon Hunters Club (2000)
Brian A Hopkins
"Imagine a parallel universe wherein Davis Grubb and Andrew Vaches had written a chase film for Sam Peckinpah, and you may have some idea of the surprising scope and depth of this short but damned impressive novel; suspenseful, violent, lean, poetic, and even thoughtful, The Licking Valley Coon Hunters Club is a return to what originally made the thriller great, before brutality and shock were mistaken for action and suspense..."

100 Jolts (2004)
Michael A Arnzen
"100 Jolts delivers far more than is promised by its title; with this magnificent collection of literate and disturbing short-shorts, some which are among the darkly funniest I've ever read, Arnzen can rightfully claim his place as the Donald Barthelme of horror. This book is a remarkable achievement."

November Mourns (2005)
Tom Piccirilli
"A novel of supreme and mesmerizing power that reads like a head-on collision between Flannery O'Connor and M. R. James...A masterpiece."

Heretic (2005)
(Templar Chronicles, book 1)
Joseph Nassise
"HERETIC has it all -- action, suspense, terror, sharp dialogue, a dynamite central concept, and richly-drawn characterization. Don't try pigeon-holing this book, because Nassise -- like his Templar Knights -- doesn't stand still long enough for you to take aim. This is cross-genre fiction at its absolute best. I, for one, cannot wait for the next book in what promises to be a long and rewarding series."

Thundershowers At Dusk (2006)
Christopher Conlon
"The finest writer you haven't read, but damned well ought to be reading."

The Hollower (2007)
(Hollower, book 1)
Mary SanGiovanni
"The kind of debut most horror writers dream about. Filled to the brim with mounting terror."

King Maker (2010)
(Knights of Breton Court, book 1)
Maurice Broaddus
"The brilliance we've all been waiting for - Broaddus delivers in a voice that cannot be ignored."