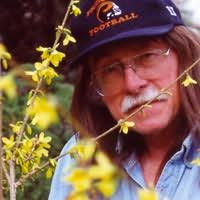 (b.1945)
Edward Winslow Bryant Jr. (born August 27, 1945) is a science fiction and horror writer sometimes associated with the Dangerous Visions series of anthologies that bolstered The New Wave.

Bryant was born in White Plains, New York. However, he was raised on a cattle ranch in Wyoming. He had strong roots in that state attested to in his collection Wyoming Sun. He attended school in Wheatland, Wyoming and received his MA in English from the University of Wyoming in 1968.

At the beginning of his career he developed an association with Harlan Ellison, which proved longstanding. This led to collaborative efforts like the novel Phoenix Without Ashes. He also owns several cats and currently lives in North Denver.

His writing career began in 1968 with his attendance at the Clarion Workshop. By 1973, he had gained acclaim for stories with a conversational style that mask rather dark realities. At times these realities are downright apocalyptic, although in other cases the message is joyous and hopeful.

When Bryant moved to Denver in 1972, he founded the Northern Colorado Writers Workshop, which continues today, and has produced a number of notable writers, including Steve Rasnic Tem, Melanie Tem, John Dunning, Wil McCarthy, Bruce Holland Rogers, Dan Simmons, and Connie Willis. In addition, Bryant has facilitated a number of other writing workshops over the years for writers ranging in skill and experience from amateur to professional. Although generally known as a writer himself, Bryant's greatest legacy may be the encouragement, instruction, and mentoring he has given to hundreds of other writers through the years.

The Gods in Anger (1988)
(Omaran Saga, book 4)
Adrian Cole
"Sombre and powerful.... fantasy the way the masters have always written it."

The Girl Next Door (1989)
Jack Ketchum
"This is the real stuff, horror embedded in genuine literature, an uncomfortable dip into the pitch blackness in the underside of the American literary tradition."

Bad Brains (1992)
Kathe Koja
"A tale of the undead that transcends every stereotype and cliche of the form."

AfterAge (1993)
Yvonne Navarro
"To paraphrase an old vampire maxim, you can have your blood and drink it too."

Northern Frights 3 (1995)
Don Hutchison
"Just as the U.S. has Thomas Monteleone's Borderlands, so Canada has Don Hutchison's Northern Frights. Each is a solid original anthology series covering the dark spectral shades of horror and dark fantasy. And we should treasure both"

Imperium Afire (2000)
(Pangaea, book 2)
Lisa Mason
"The speculative imagination of Lisa Mason must be counted among Science Fiction's most distinctive."